Tim Shriver on the Colbert Report

I only wish Stephen hadn't closed with the gay joke.

Visit from the Tooth Fairy 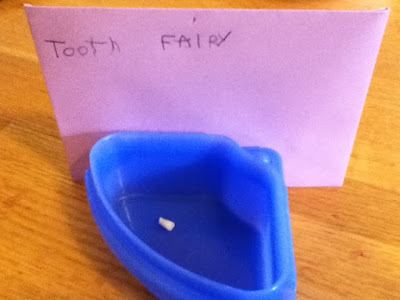 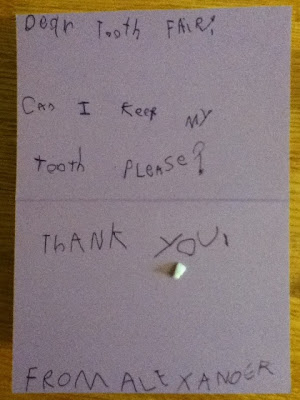 I love being a mom! (embedded video below)

Our big boy is growing up. 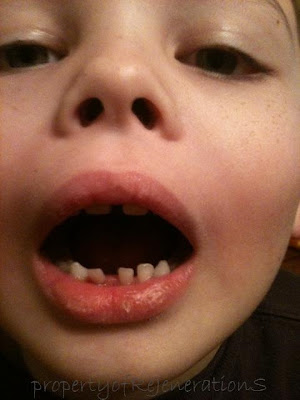 His daddy snuck into his room and snapped this picture of our little guy who was turning 6. 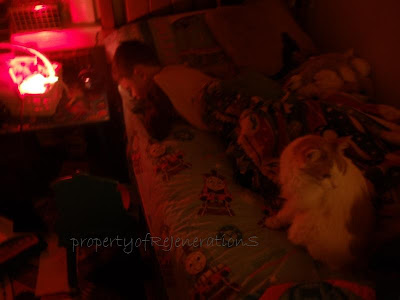 For months he's been asking for this giant donut pan. He requested the words Misty Island Rescue on his birthday cupcakes (it's a Thomas the Tank Engine story line). 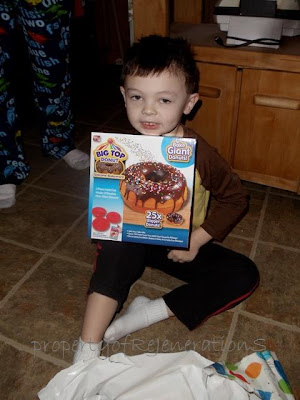 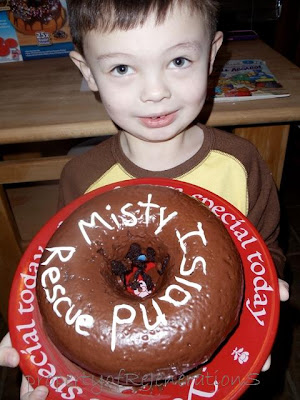 I went to his kindergarten class with the cupcakes (very, very blue icing per the birthday boy's special order) and read them the story "The Stinky Cheese Man." 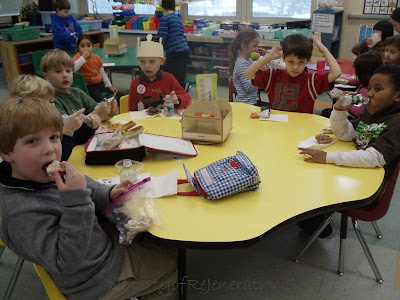 We did a craft with beads and then it was time to get ready for his big party. 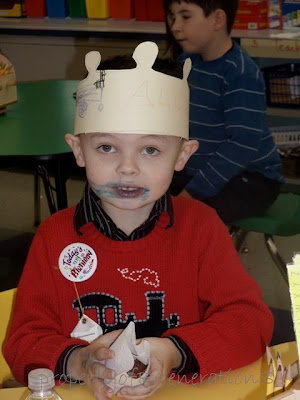 As luck would have it, a local skating club was hosting a free open house for Alexander's school so we started the evening on the ice.

I stayed home with the girls as they were really sick, so this is the only picture from the first part of the party. 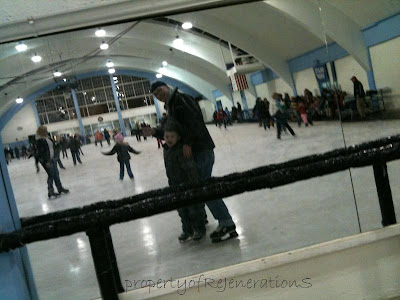 After skating, Mark came home and I took over at Bucca di Beppo for a pizza party. 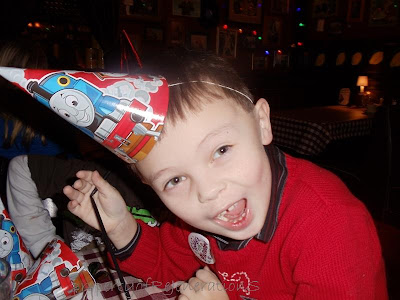 We had a wonderful turn out and I had lots of help from our friend Max's dad. 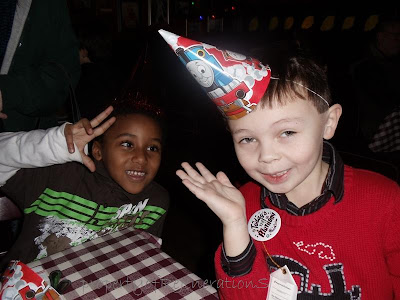 The pizza was really good and the cake from the Bakery House was delicious. 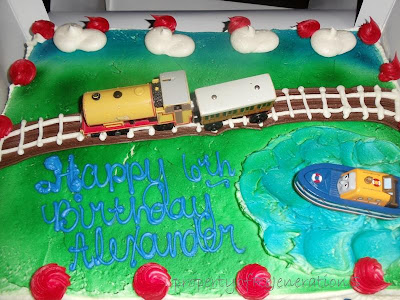 Most importantly Alexander and his friends had a great time. 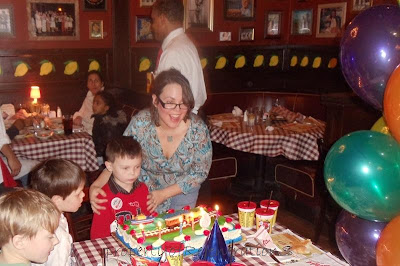 For Cindy and David Combs 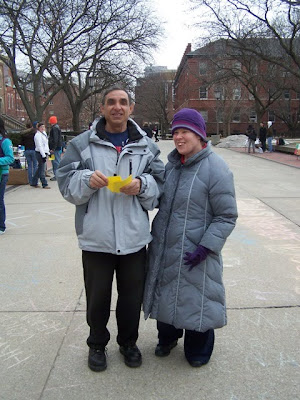 A year ago I was honored to be introduced to my friend Cindy Combs. She is the self advocate who volunteered to go on live television with me to promote the Champaign County, IL Spread the Word to End the Word campaign and events in 2010. Cindy and I met at Developmental Services Center (DSC) a day or so before our morning show appearance to talk about the interview. DSC is an essential organization for people with developmental disabilities in Champaign County. Sophie's amazing developmental therapist Judy was from DSC and the developmental playgroup there was essential to her progress during our 3 years in Champaign, IL. 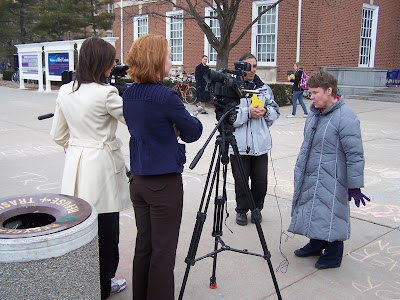 DSC staff members Janice McAteer and Kim Harris joined us and I had asked my friend Tracey Fairchild to go over what to expect during our interview as she had been doing the Morning Show for quite a while. She ran us through practice questions and Cindy brought us all to tears with her heartfelt message. Fearless and unhesitating in her responses, she talked about how hearing the "R" word hurt her and her friends with developmental disabilities. She talked about how her life is full of friends, work, and hobbies and that she is just like everybody else. In her gentle yet powerful way Cindy made her case for inclusive language which would lead to acceptance and respect for all people. I left that meeting humbled by my new friend. 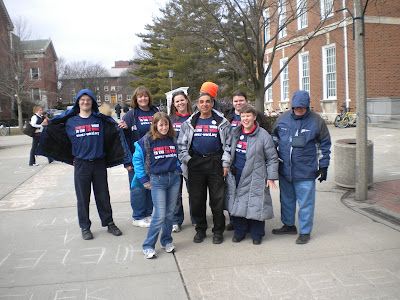 On the morning of our live tv appearance, I was a bundle of nerves, but not Cindy. She and Kim had arrived at the station before I did and were chatting pleasantly. During our appearance Cindy spoke just as beautifully as she had during our practice run while I fell over my words. Listen to her message.
A couple of days ago I got a call from my dear friend and President of the Champaign County DSN. Ellen was not calling with good news. Cindy and David had been riding their tandem bicycle as they have for years when they were struck by a car. Cindy passed away. David was air lifted to the hospital where he remains in critical condition. My former community is in deep mourning and our hearts are broken. A great light in this world has gone out.

Thank you Cindy for being such an inspiration. David, we are all lifting you up in prayers.
Tributes can be left at DSC's website, http://www.dsc-illinois.org (News tab, then Blog)
Initial news coverage of the accident (HERE)
Email Campaign Calling for Justice (story HERE)
Take the "R" word pledge today http://www.r-word.org/
Posted by JRS at 8:29 PM 3 comments:

"We have a silent epidemic in this country. Children with special needs remain the primary targets of bullies in schools across this country. Health care continues to discriminate against people with intellectual disabilities. Employers still don't have the solution for hiring people with intellectual disabilities. Special Olympics is not just a nice event...We're a social inclusion movement fighting discrimination and prejudice...The current House budget eliminated [funding]. It's not a hair cut, it's a guillotine."
---Special Olympics Chairman and CEO Tim Shriver
As I said to a friend who first alerted me to the budget cuts, maybe members of the House would like to come over and take candy from my baby as well. For shame!
This is one video you want to watch.

Visit msnbc.com for breaking news, world news, and news about the economy

Gayle King: Interviews - Eliminate the R-Word
What a great way to end this important day. Please listen to this interview (click the link above). Gayle King does a great job interviewing Tim Shriver, Chairman and CEO of the Special Olympics on the Spread the Word to End the Word Campaign.
Oh Happy Day! Thank you so much to all of you out there working to make this a more inclusive, accepting, and respectful world for our loved ones with intellectual disabilities.
Posted by JRS at 7:49 PM No comments:

Spread the Word to End the Word, Op Ed by Self Advocate 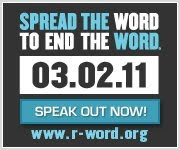 An athlete named John Franklin Stephens wrote an amazing op-ed on why the R-word hurts him. You have heard me explain why using the R word hurts me, my daughter and all of our friends in the disability community. Now it's time to read why it matters, directly from the words of an amazing self advocate. Please read John's piece and then visit www.r-word.org to sign the pledge.
So without further ado...

Using the word "retard" to describe me hurts

A lot of people are talking about the movie "Tropic Thunder." One of the reasons that it is being talked about is that the characters use the term "retard" over and over. They use it the same way that kids do all the time, to jokingly insult one another.

The people who made the movie, DreamWorks and Paramount, and many of the critics who have reviewed it, say that the term is being used by characters who are dumb and shallow themselves.

You see, we are supposed to get the joke that it is only the dumb and shallow people who use a term that means dumb and shallow. My dad tells me that this is called "irony."

So, what's the big deal?

Let me try to explain.

I am a 26-year-old man with Down Syndrome. I am very lucky. Even though I was born with this intellectual disability, I do pretty well and have a good life. I live and work in the community. I count as friends the people I went to school with and the people I meet in my job.

Every day I get closer to living a life like yours.

I am a Global Messenger for Special Olympics and make speeches to people all over the country. I once spoke to over 10,000 people at the Richmond Coliseum. I realize that I am a voice for other people with intellectual disabilities who cannot easily speak for themselves. I thank God that he gave me this chance to be someone's voice.

The hardest thing about having an intellectual disability is the loneliness. We process information slower than everyone else. So even normal conversation is a constant battle for us not to lose touch with what the rest of you are saying. Most of the time the words and thoughts just go too fast for us to keep up, and when we finally say something it seems out of place.

That is why I love being a Global Messenger. I work for days telling my dad what I want to talk about and he tries to write it down for me. Then we do it over and over until we have something that says what I mean. We wrote this letter the same way.

I want you to know that it hurts to be left out here, alone. Nothing scares me as much as feeling all alone in a world that moves so much faster than I do.

You don't mean to make me feel that way. In fact, like I say in some of my speeches, "I have always depended on the kindness of strangers," and it works out OK most of the time. Still, it hurts and scares me when I am the only person with intellectual disabilities on the bus and young people start making "retard" jokes or references.

Please put yourself on that bus and fill the bus with people who are different from you. Imagine that they start making jokes using a term that describes you. It hurts and it is scary.

Last, I get the joke — the irony — that only dumb and shallow people are using a term that means dumb and shallow. The problem is, it is only funny if you think a "retard" is someone dumb and shallow. I am not those things, but every time the term is used it tells young people that it is OK to think of me that way and to keep me on the outside.

That is why using "retard" is a big deal to people like me.

John Franklin Stephens is a Special Olympics Virginia athlete and Global Messenger who lives in Fairfax, Va.
Be a fan of Dignity, Inclusion, Acceptance, and Respect. Take the R-Word pledge today at www.r-word.org
Posted by JRS at 12:01 AM 1 comment: 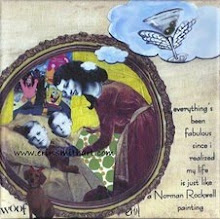